Every time I see Hoosier Daddy's avatar, it reminds me of the worlds largest siren that was built by the Chrysler Corp and installed in major cities all over the US. As a kid in Detroit, I heard these things, and it was without a doubt the spookiest thing I have ever heard before or since. The closest sound I could describe it being is the siren-like sound in the first move The Time Machine.

This thing is so large that seats were installed on most models so the operator could ride the thing around in circles while he gunned that big Chrysler Hemi!

"The compressed air screams through the chopper and out through six giant horns with an exit velocity of 400 miles per hour. The result is an incredibly loud 138 dB sound (measured 100 feet from the siren)."

(did I possibly see this topic posted here a few years back?)
"I know I've got a lot against me: I'm White, I'm Protestant, I'm hard working. Don't you have an Amendment to protect me"? Archie Bunker
Top

I saw a tv show (speed channel), where Big Daddy Don Garlits was using one of the engines in a a car.
He said it was in perfect shape and was a great candidate for a classic hot rod.
426 Hemi, I do not remember the carb or manifold setup.
"Everyone Should be aware that you're just a screen grab away from infamy."
Top

Thanks! I've heard stories about the Chrysler siren. I'd love to see that mammoth contraption in person, and maybe hear it cranked up -- from a mile away, of course!

My avatar is the ACA Allertor 125, an old air raid siren from the 1950s that was manufactured well into the 1990s. You don't see too many of them in mountain country, but the Cincinnati area is blessed with at least a few fully-functional 125 sirens. The Allertor was unique in that parts were made of fiberglass, and the "leaf blower on steroids" appearance is certainly one of a kind. The air came in through the lower round opening and the sound is forced out through the oval shaped upper horn. The Allertor was totally mechanical and had a number of internal settings to raise and lower the pitch and change the rotation speed (something to do with gear ratios) for local preference. Different models could be ordered for single tone or a dual octave sound. The Allertor is one of two outdoor sirens that, in my opinion, had that frightening The-End-Of-The-World-Is-Happening-Right-Now sound, especially from about a half mile away with lots of echo from buildings and hills.

The other really cool siren from the same era is the more common Federal Thunderbolt 1000 series. The square shaped trumpet horn is also unique, but a less radical design than the Allertor 125. The Thunderbolt was actually powered from a box (called the "blower") mounted on the ground, a rooftop, or a telephone pole under the rotating projection horn. Similar adjustments were available on the Thunderbolt for rotation speed and pitch. The earliest versions were the Model 1000, called the "skirt" model (because the horn sort of looked like a formal prom dress) and the later Model 1003 was the "bow tie", because of two horn-mounted solenoids that stuck out on each side like a bow tie. The Thunderbolt had a distinct raspy sound that was equally if not more frightening than the Allertor. There are still a lot of aging Thunderbolts in service, but the unit has been out of production for at least a decade.

Despite its massive size and ear-splitting volume, there weren't a lot of Chrysler sirens ever sold or installed. Price? Marketing? Overkill on size and decibel rating? Couldn't get the government contracts? Who knows. Still a neat icon of Cold War memorabilia.

Today's outdoor warning sirens are being slowly converted to electronic speaker systems, with a variety of computer generated tones and warbles, and the capability to give wide-area voice announcements just like a PA announcer at the local high school football game. The electronic units draw a lot less current than the old mechanical sirens (which usually required a dedicated 220 or 440 volt AC power drop) and are better suited for solar-powered or battery powered backup systems, but they aren't nearly as loud. In many locations, old mechanical sirens must be replaced with two or three electronic speaker systems at multiple locations to duplicate the same area coverage.

Hoosier Daddy wrote:Despite its massive size and ear-splitting volume, there weren't a lot of Chrysler sirens ever sold or installed. Price? Marketing? Overkill on size and decibel rating? Couldn't get the government contracts?

According to the website "a few hundred were sold". I think New York City probably only needed about 20 of those monsters to cover the entire city and it's boroughs! The other large cities probably had 10 or so apiece. that's (give or take) about 200 of these gigantic units. Places the size of Charleston or Huntington would only need one for the entire city. Hell... you could probably place one in Milton to cover both cities!

Of course, cities our size never came close to having one.
"I know I've got a lot against me: I'm White, I'm Protestant, I'm hard working. Don't you have an Amendment to protect me"? Archie Bunker
Top

Great thread. I am gonna dump the siren videos to an MP3 format and wire it into my clock radio.

There used to be one of the Federal Thunderbolt type sirens in use at one of the towns along 23 south of Columbus. I remember noticing it by the odd appearance with the blower box mounted lower on the pole and and the horn at the top.

What are the type of sirens that seem to show up at the volunteer fire houses? They are usually round with horns sticking out in all directions.
Top

I didn't realize that the ACA Allertor 125 was so large until I watched a video on it and took this screen shot:

I think the Thunderbolt has the greatest "siren sound" I've ever heard.
"I know I've got a lot against me: I'm White, I'm Protestant, I'm hard working. Don't you have an Amendment to protect me"? Archie Bunker
Top

sportsvoice wrote:There used to be one of the Federal Thunderbolt type sirens in use at one of the towns along 23 south of Columbus.

sportsvoice wrote:What are the type of sirens that seem to show up at the volunteer fire houses? They are usually round with horns sticking out in all directions.

Most of the sirens I've seen in our area are either the Federal Model 5 ("the birdhouse") or the Federal 2T22. They are omnidirectional, general purpose mechanical sirens controlled by a relay box. They produce two sounds: either a "peak and hold" for about 3 minutes (called the "alert" sound) or an alternating up and down sound (called "attack") and can be controlled locally by pushing a button, or remotely by dedicated phone line or by a tone encoded radio signal. The alert and attack designations came from the old Civil Defense days. Attack was used to tell you to head to the fallout shelter 'cause the Russians were coming, and Alert was the "all clear", advising that everything was OK and you could return to a normal life. Quaint, but also frightening. An entire generation grew up on this stuff. Thank God we never needed it. 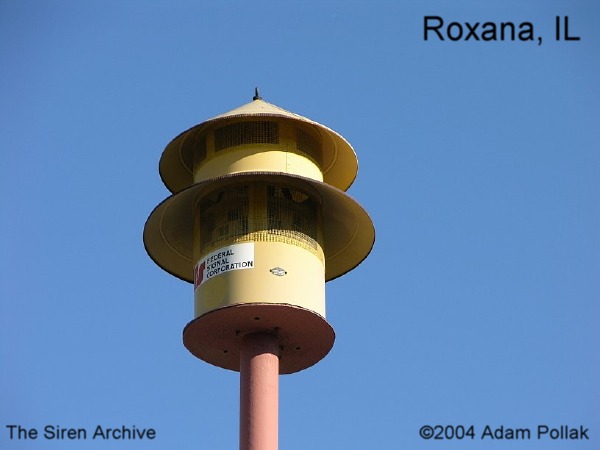 "Skirts" and "Bow Ties" - The addition of dual solenoids on projection cone
Thunderbolt 1000 (left) vs. the later 1003 model (right)

The original factory paint job (early to mid 1950s) on Thunderbolts was an alternating black and white "zebra". These are very rare to find, as almost every functioning unit is that universal Civil Defense Yellow color. I'm guessing this odd vehicle mounted arrangement is either a mobile demonstration unit for the sales team or a city-owned vehicle used to test coverage areas. Another unanswered trivia question from the dusty archives of the Cold War. The second picture illustrates the large "blower" box that created the sound, the pipe leading to the projection horn, and the smaller upper box that contained a motor and gears to rotate the horn.

Translators are a Pox on the FM radio dial.
Top

My father was a volunteer firefighter for years and served as everything from Chief to Treasurer. I fondly remember having the opportunity to "blow the fire whistle" to call the members to the firehouse for a meeting. In those days, the whistle was blown from the firehouse by the first arriving member after a "fire call". It was hooked to a light switch inside the station's bays. Now, they blow the whistle from the 911 dispatch office and I don't believe they use it for meetings anymore.
Top

When I was a kid, they still used to do attack siren tests. And they used to blow them briefly at 9PM every day during the summer. It was illegal then to be out if you were under 18 after 9PM, which was a law I and others flouted, uhh, every single day of summer vacation...
"Show me just what Muhammad brought that was new and there you will find things only evil and inhuman, such as his command to spread by the sword the faith he preached"
-Manuel II Palaiologos Byzantine Emperor (1391-1425)
Top

They test them every Wednesday at noon in Charleston. I'll have to take a closer look at one of the buildings they're mounted on.

BTW, this was a fascinating thread. Thank you.
Top

The Thunderbolt seems to me to be the quintessential "The world is ending NOW" sound.
"Show me just what Muhammad brought that was new and there you will find things only evil and inhuman, such as his command to spread by the sword the faith he preached"
-Manuel II Palaiologos Byzantine Emperor (1391-1425)
Top

<Bump>
Awesome thread from over four years ago ...

Wanted to add the elusive (back in 2009) Thunderbolt 1003 Hi-Lo sound used in some areas to alert the local volunteer fire department. At one time, Cleveland and a few other big cities used this sound for Tornado Warnings, keeping the traditional "attack" signal to let us know the Russians were coming.

That siren has certainly seen better days, but you get the point ...

Translators are a Pox on the FM radio dial.
Top
Post Reply
14 posts • Page 1 of 1